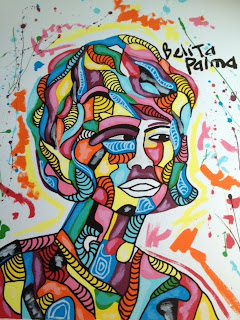 First is light blue, than is dark blue, followed by yellow, orange, red and so on going in circle from one side to another of a white canvas, never changing this sequence. No sketch before, no draft ideas, just a big white surface in which the artist, “as a small God” give birth to something unique and special: an artistic creature, one more picture.

This is how GUILHERME MAMPUYA use to work. The canvas is on a table in a room of his house/gallery in Zango 0, a new building area in Luanda, where he is working at his last collection of pictures requested by two main local institution, a National Bank and a Governmental Office.

Guilherme Mampuya is an angolan artist very well known in the Country and abroad. He was born on the 4th of November 1974 in Huige, in North Angola.  He lives and paint in Luanda where he has his ateliér. He won the Ensa Arte Award in 2008 and in 7 years of painting he has done 15 Individual Exhibitions in Luanda, Lisbona and Bruxelles.

“I’ve been passioned about art since I was five years old. My first artistic work is a wooden sculpture of a horse. I made it in Moxico. I was drawing very well when I was in primary school, but after it my parents sent me to study law. I didn’t like it even if I became a lawer, but I always wanted to paint. For this reason I left working for the government and started to paint” said Mampuya while he was showing us his drawings. 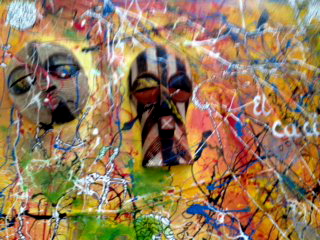 In his paintings Mampuya, a nearly fourty years old goodlooking guy, likes to go from abstract to figurative leaving to the observer the chance to find what is hide in the work. So suddenly a face pop up from the caos, or a traditional music instrument, or an animal or other symbols of angolan culture and traditions. Then, staring at the pictures and leaving your mind feel relaxed and free, the message hide in each picture comes out from the colours explotion and you can see  a warrior from the north regions or a lion roaring at a buffalo, a wooden traditional mask transformed through a shower of colors, an imbondeiro fruit or the Rehina Nzhinga profile. 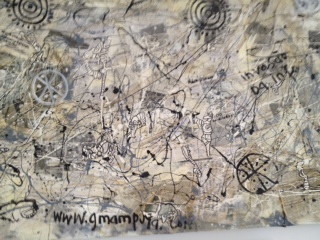 Today Mampuya is a smiling happy person with a nice family and the wish to tell a new Angola peacefull and free, but the past is just around the corner.


“When I was young there was a civil war in Angola and it only ended in 2002 when I started to paint. Logically in my first drawings you can see the civil war. In all my works I was representing people in war, sad women, orphans but later, with the time, I decided it was better to forget the past”. “Life goes on" Mampuya repeats a number of times while he’s telling us his story.


“Nowadays we live in a society – he went on saying - where there is a lot of pressure. Painting, Music, Theatre, Cinema can help people to cool down, to relax. After an hard work day going home, you can look at your picture on the wall and feel good getting lost in the fantasy the artist has created for you. Painting is giving people a fantasy.” 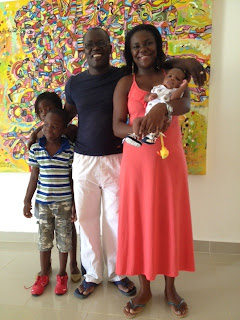 While his wife is feeding his last son, the third one, Mampuya shows us his huge house that in few months will become a Personal Art Gallery.


"In Angola - is Mampuya's conclusion - artists are free to express themselves but there are no Art Schools, just few Art Galleries and no people who want to invest money in this field.”


Helping Art to find its sunny place in Angola looks to be Mampuya's future challenge in order to sensitize people understand the importance of culture for the growth of a society.