The Royal Borough of Kensington and Chelsea in this end of October has the colours of North Africa and Middle East thanks to the endless cultural and artistic choices from the Nour Festival.

Nour in Arabic means “light”, and this is a name usually given to either boys or girls. Light on the Arab culture, on its diversity, on its artistic production, as well as on its difficulties and wars, is what Nour Festival, now for the sixth time, is bringing here in London.

Kicked off on the 20th of October this festival is going to end on the 8th of November. Showcasing film, music, literature, poetry, performance and visual arts, Nour talks to visitors from a variety of different backgrounds, culture, countries exactly the population of this Borough full of people coming from all over the world.

Nour, speaking in English to this crowd, is telling the richness of the Arab world. To miss Nour in London is such as miss the chance to understand London itself.
Attending the lecture of an expert on the Syrian civil war, getting exited for the sound of an Iranian percussionist, be enchanted by the movement of a Lebanese dancer, just not to mention the taste of the food or the beauty of the art exhibitions, is something that gives the visitor the chance to open his/her mind and soul to a piece of world tired to be told  just for its crisis and wars.

Happy "light" to everybody, then!

FROM AFRICA TO LONDON... …where the real jungle is!

And finally it’s London! First impressions from someone brand new in town, but with an African background… I spent the last 8 years in African countries where the sun shine and the weather is good, but also where, for the 90% of the local population, what really matters the most, is just to try to survive another day.
African towns, despite the fast growth a number of those are witnessing, especially the ones that are capitals of Oil production Countries, are places dying to seem like brand new shining Dubai of the Continent. And that is what the governmental élites like! But what about the people?

Actually, these are cities where, for most of the families, the real challenges of everyday life are definitely far from the londonians ones. Catch the tube on time, book a dinner at the very cool restaurant of the month, be the first one to get a new Iphone, get the last discount ticket for that show in Soho, taste the finest escargot in the smallest brasserie in town, are not exactly at the top of  the to do list of an average African citizen.

For an African middle class woman the first issue of the day is to find enough water for her family daily need. Eventually, is walking to the well, queuing and then go back home with a basket filled of water on her head or buy the yellow water tank from the guys who carries water around the slums.

Then it comes to the food. Water first, food if you are lucky! So, instead of going down the street and be overwhelmed by the bulimic offer of ready made food that drive you crazy when it comes the time to choose, “what if today I go for a soup, no better a salad, maybe a beagle, or sushi, just a sandwich, no rice and chicken, oh what if thai or vet, no Italian,…”  and the shock arrives when you realise it’s already time to go back to the office!

Well instead of having this food-trouble an African mother goes to the street market, get a cassava, go back home and start peeling it, cutting it into cubes and then reducing it in a flour she will later cook as a “polenta” for the one a day meal she’ll provide to her family.

Last but not least it comes to the health care. If you are sick in London, even if complaining about NHS service is a national sport, is a bit different from being sick in a place where the medical centre are run by unskilled people full of good will but bad training and this is not their fault, but it’s due to the extremely low level of the local educational institutions. It means that if you are in one of these boom African capitals to keep the health of your five or six or more children bite by a mosquito full of malaria or dengue you can either go to the hospital where other thousands of moms are there with their children waiting to be attended or try with the help of special herbs and, sometimes, of spells. So let’s try the trick “find the difference!”

First of all is the whether! Four seasons in a day and clouds running fast through the deep blue sky and then suddenly a drop of rain speaks for the others telling you “go back to your layers, water and cold are just around that corner!” But you don’t mind, because nobody does and that’s it! In London you soon learn life doesn’t stop because is wet. On the first day in town I saw in less then 2 hours: numbers of kids playing football under heavy shower; dozens of young ladies, naked white legs under light skirts and sneakers, naked long arms, naked bellies, perfectly comfortable at 15’ C; tons of cyclists riding their bicycles in the windy morning, in their summer t-shirts; baby child, bare feet, on their trolleys pushed by moms totally happy with their light dressed children in the humid gardens; quite a number of elegant clerks in their white shirts, no jacket, on their grey trousers, black shoes, ready for the office in the very cold early rushing hours.
I’m afraid this cold weather is highlighting my rheumatics’ pains, as much as is making me feel a bit sorry because, at the end of the day, I’m definitely enjoying this chilly days full of rain and humidity. 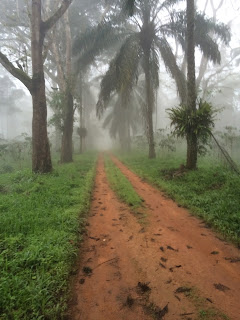 It’s just a matter of colours! Yes, what comes first, as the greatest difference between this island and the enormous Africa, is all about colours. Back there my eyes were full of red, the African soil; of yellow, the shiny tiring hot sun; of dirty white, the dust covering everything and fluctuating in the air; of black, that dark in the people’s skin, in their deep eyes, in their curly hair.

Here, instead, is all about green! Gardens, grass, parks, trees. And grey: clouds, clothes, streets, drops of rain.

Is there any best colour in life? Is there a colour that is worth more then another? Is there a reason why anyone of those colours must have the number one place in someone’s life? No. I don’t think so.

That’s my answer! What does matter, to me, is just what that colour make you feel. And today here in London, I feel that, those days of my life back in Africa, when my eyes were so full of red, are part of my blood, red, of course! But I also feel that these greens and these shadows of grey are just willing to find a place in my red soul so full of sun and dust.