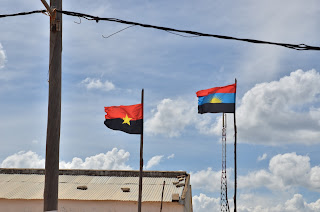 After months of detention 17 young Angolan activists were charged today in court in Luanda with rebellion against the government. Their fault, according to the court, is they organized a reading of a US academic's book. In fact, the book they were reading back in June when the police captured them in Luanda is Gene Sharp's 1993 essay From Dictatorship to Democracy: A conceptual Framework for Liberation. The book compiles 198 nonviolent methods of action to combat dictatorial regimes.
That in the Angolan regime of president Eduardo Dos Santos was believed enough to arrest those readers on charges of planning a putsch.

Charges read out in court today included also "acts of rebellion, planning mass civil disobedience in Luanda and producing fake passports". The activist's lawyers defense told the freedom of speech was protected under the constitution.

During these last four months of detention, while a number of activists were on hanger strike, human rights groups across the world accused Angola's president Eduardo Dos Santos of using the legal system to crack down on critics after several activists were detained this year.

Dos Santos has maintiened peace since the end of the civil war in 2002 and overseen rapid economic growth. But his opponents also say he uses a well-funded military and patronage from oil sales to keep a grip on power.
Pubblicato da Francesca Spinola a 10:42 Nessun commento: