(English) Angola: where new schools and hospitals are inaugurated but there's a lack of teachers and doctors 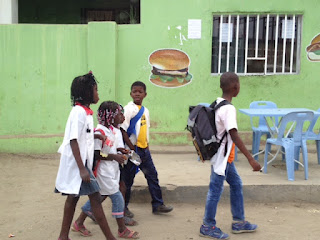 It is back to school week this one for angolan students after a 34 days off to let governmental people set the polling stations for the 31st August general election in Angola.

The white of their school uniform is back in the street where they walk to get to school any time during the day, because they take turns. First turn, four hour each, is from 6 'o'clock in the morning to 10.00, second turn 10.00 to 2.00 pm, third turn 2.00 pm to 6.00 pm, for the Primary school, Secondary school and Unversity they have turns until Midnight.

This happens because Angola has a huge number of young people, 47% of the population says Unicef are aged between 0 and 14, compared with a population of 19 million people in  a Country that hasn't got enough infrastructures and, even when there are, there aren't enough teachers, and those who works are not well trained.

Since 2002, with the beginning of the peace process, the situation is a little changed. According to official data students today are 6,4 millions in Primary and Secondary school and also the University students are more then before according to the governmental press revues.

The opening of the new Campus Agostinho Neto has been pushed by the government but it is not working for the lack of Professors and Professionals.

Anyway Unicef data are comforting when says that 76% of the young people age 0 to 12 is nowadays at school, even if 1 million of them is still out.

The real problem, this is something which concern Unicef in its reports, is the quality of the educational system which is not acceptable and so far just a 20% of the population between 12 and 17 years old go to school.

This is a problem linked with the lack of a good training for teachers. Education is not the only area with this kind of problem, which concerns also the Health system where there is a huge lack of professionals and the number of new infrastructures inaugurated by the angolan president remain empty, as it happens for the two brand new Hospital of Catinton and Viana in which there are no professional working and patients can't be attended.

Even the governmental Jornal de Angola published two days ago a four columns story on the lack of medical professionals. The story says that 205 people each day from the opening day are trying to be attended but there's just one Doctor  there and it's impossible to attend everybody.

These are the mistakes of a system that has been growing a lot in terms of infrastructures but forgets to grow along with the palaces, roads and palm trees that line it, its people, giving them the right education and the means to build the country with their own hands.