(English) Angola: the future with no time of the street children 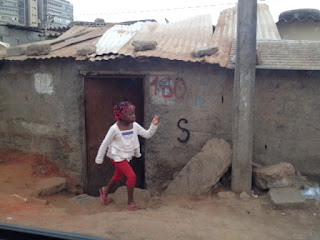 So far a week after the election is already gone. Mpla has won and  President Dos Santos is still where he was. Even in Sambizanga everything is the same. In this "barrio" of the angolan capital, Passos talks to "menions de rua" as should do a father or a brother, a friend or a good teacher who loves his work, as he does. He speaks with that kind of calmness which expresses all the african wisdom and he is able to avoid any rhetorical.

He tells to 30 children aged 8 to 15 what does it mean to be a child. He calls this phase the number 1. Then he explains them the changes that arrive during the adolescence, which is the phase number 2 and finally he tell them about the phase 3, when children become men. He want them to understand they are in phase 2 even if they are living since a long time as if they were in phase 3.

Passos want them to know that is not their fault. He want them to understand that this gap is a "gift" of the street, that one which for them is mom and dad, home and escape, place/no place where to lose themselves.  Because being a "menino de rua" is quite sure you are going to lose a bit yourself and they can understand it because they are still in the street or they are just gone out from the street in order to go in "Casa Magone" which is a place for street children driven by a religious men, close to a small church and a football field, in the very middle of a poor slam in Luanda.


When Passos talk, the children listen carefully to him. Someone lies down on the desk, tired, others keep their hands on the bellies, someone look out of the windows from where the sound of the street arrives… and can still fascinate. Anyhow, they keep their attention on him because he is telling them what they will become when they will be grown up. Because they are not grown up yet, even if they know what is sex or they have been raped, even if they are robbers or take drugs.

Passos has the power to show them their future, to make them believe they also have a future and they feel a kind of wonder because in the street they use to live day by day. Five dollars few minutes hugging a slut, ten to twenty dollars for a bed, maybe something to eat, an then... a dog drinking waste water in an open sewer, the mud, a man who comes by carefully inviting you behind that shack. Street children are keen in having a kind of future made of few minutes ahead, a future with no time.

Then a guy like Passos comes  and tells them that they have a future as every other child in the world, that when they will be grown up, they  will have the opportunity to study to become a mechanical, a stenographer, a nurse, a construction worker or, if they like, they can try to became doctors. Passos so strongly believes in what he is saying while he is talking, that the street children also start to believe in it and from their faces you suddenly can see, maybe is just a feeling,  that kind of old aspect that make them look too old and too lost, desappear.

The children of the street phenomenon is cross-cutting and affects many countries with different skills, that one with a GNP equal zero, and that one with a high GNP. Each one of these street children has his own story to tell, even if they don't like very much to talk about themselves, but their stories and the end of the day look all the same.

They all belong from large families unable to feed all their children, so the parents "lose" some of them in the street using to justify themselves superstition or magic. They come from families with parents drug addicts or alcoholics or their parents are too young and poor.

Whatever the cause, this phenomenon does exist, even if these children are very good in hiding themselves! Passos looks after them, but is not enough. It's a matter of culture, money but, primarily, is a matter that should concern the policy maker, whom should seriously think kind of politics able to keep off the street these children from Angola, or Brasil, or India, or... and in the most lucky case, to reinsert them in their original families