MINE: Surviving the peace in Angola 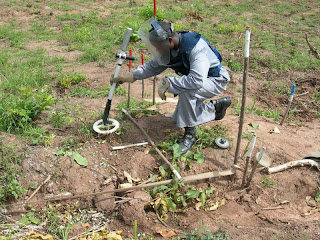 Angola is the third Country in the world for mine contamination and its Moxico province is one of the most contaminated. In Angola is still too easy to see everyday a considerable amount of people without a leg or an arm, or in anyway wounded by the explosion of mine.
The International Mine Awareness Day, which took place on April 4, is an important reminder for Angola that the work of de-mining is active throughout the country, whether by NGO’s like MAG and Halo Trust and NPA and DCA or by the Angolan Military or the Angolan government, or private agencies.
Angola has also celebrated 11 years of peace. Long after the war is over, some weapons wait underground for years, a lurking threat. As one of the world’s most heavily land-mined countries, Angola still has over a decade of de-mining ahead of it.
At the Viking Club, on Thursday April 11, the Angola Field Group,  presented a short film  “Surviving the Peace, Angola”, about an Angolan girl, Minga, who played with a landmine. The film gives a close-up look at de-mining in Moxico province and gives an idea of the tragedy caused by the mine explosions. 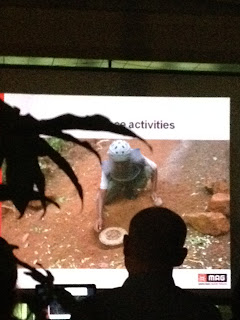 The presenter, Tony Fernandes, Technical Operations Manager/ Senior Manager in Country for MAG Angola, the NGO de-mining in Moxico province, told that the average number of wounded people by land mine is in Angola close to 1 million.
So far the angolan province affected by the presence of mine are: Malanje, Benguela, Huambo, Biè, Moxico, Kuando Lubango.
Answering to a question on how much time is needed to definitely clean the fields from the mine in Angola, Tony Fernandes said he strongly belives that the more the governments, Ngos and private sector invest and spend money for the de-mining activity the faster the fields will be cleaned by the mines.
MAG, Mines Advisory Group, is a British-based Non Governmental Organization based in Manchester, UK, founded in 1989 and has had de-mining operations in over 35 countries. source: Angola Field Group